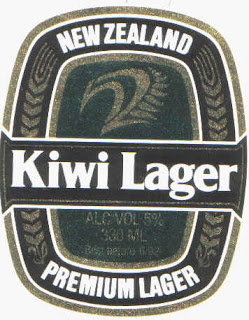 Over time beers come and go due to many reasons. A lot of it these days is that everyone wants to drink international style lagers (or should I say drinking brands) that are bland and boring. So I thought I would come up with six beers that I would like to try again once, now that they are not available anymore.

1. Kiwi Lager - New Zealand's lost lager. The one that could have become our nations signature beer. DB had to stop making Kiwi Lager as part of their deal to start production of Heineken. Thanks Heineken.

2. Malt Mac - this was the most interesting beer to come out of Mac's. It was made with peated malt so had a big peaty scotch whisky taste, but behind that was a huge Cascade hop hit. Also was exported to the Michael Jackson Beer Club in the USA and was featured beer for a month.

3. Montieth's Sasion - best example of D Saaz in any beer made in New Zealand. A shame the public of New Zealand didn't get it (understand it I mean). Also a shame that they announced this beer on the same day they announced the closure and layoffs at the Greymouth Monteith's Brewery. It was possible the beginning of the commercialization of what had been an exciting brand with interesting beers.

4. Monteith's Dopplebock - I'm talking about the 7% version that was within style and the marketing people that didn't know anything about beer, hadn't called it a Winter Ale on the label. This beer was even better years after its best before date (yes a cellared beer, even vintaged can you believe it) as the slight oxidation continued to increase the malt. Awesome malt.

5. Mac's Hop Harvest Pilsner - this was the second best Mac's beer that was ever made. The hop aroma and flavour was at a level that could justify the term "hoppy". Nice work Mr Goldman.

6. Leopard Continental Lager - I'd like to try this again due to the fact it was one of my very first memories of drinking beer, and drinking from one of the old steel cans when I was a kid. It just tasted like beer then, be nice to have known what it actually tasted like. (not the rehashed version Lion came out with a few years ago, I'm talking about the 70's)

I could have included the likes of Australis Benediction or Romanov (cause I still have some), and the 1998 Pink Elephant Mammoth, or any number of obscure one off beers that most of the nation didn't get to try, but I didn't

Have a vote and make a comment on your own Lost Kiwi Beers.

A vote for the long forgotton and often maligned past

I'd do anything for another Benediction.

I still wonder about the Speights I first sampled in Timaru around 1962. It wasn't an ale, or a beer, or a lager. In fact I wasn't sure what it was, but I could understand why Southerners were so enthusiastic about it. There wasn't anything in ChCh quite like it.

Sadly the stuff that they serve up behind that label nowadays is nothing like it, I guess the accountants have had their evil way, or the yeasts have mutated or something.

Really good piece Luke. I voted Malt Mac. I can only vaguely remember tasting it (same with the two Monteith beers). I thought Hop Harvest Pilsner was a Tracy Banner creation?

philth (and Luke) - was Benediction much different from Galbraith's Resurrection? I guess it was fairly different, given one was bottle-conditioned and the other is served from a cold-conditioned tank, but is it basically the same.

Got this email from Geoff Logan at Sunshine which I which I thought I would share.

Hi mate. Good to see you last week. Forgot to inform you that the greatest "lost" beer in NZ was Leopard DeLuxe Lager which, if my memory is correct, won Mondiale a year or two prior to Steinlager. I'm sure NZ has won it 3 times, Kiwi Lager being the other. Winning it seems to be the kiss of death, eh. The Leopard was definitely the best NZ lager ever, in my opinion, and it was Ron Stockan's pride and joy!
Cheers, Geoff.

I remember Leopard lager from the 1970's. Used to drink it on Thursday nights at the Homestead Tavern in Rotorua. Wouldn't mind trying it again.
Other lost beers I wouldn't mind trying again are Bavarian bitter & 10 Draught beer. What would be the nearest modern equivalents to these three beers?

Like Glenn I would love Bavarian Bitter to come back (late 1970s) . I also liked McGavins Pale Ale (early 1980s). Both beers I had to get friends down country to bring to Auckland for me.
The other was Wesbrew which I finally tracked down in Greymouth in 1978- a real "golden" beer.