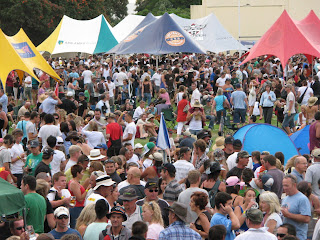 As craft beer quickly becomes more popular, and the selection of beers from craft breweries grow, we are seeing more and more Beer Festivals popping up around the country. Since we are heading into February we are hitting the peak month for getting out and sampling beer.

A Beer Festival should be that opportunity for you to sample beers you don't usually drink or don't have access to in your local market or area where you drink and shop.

1. Blues Brews & BBQ's - Mt Maunganui
This is the most successful beer festival in New Zealand, having just completed its 13th festival on 10th January 2008. The winning formula seems to be the mix of a good selection of beers, good food, entertainment in a family friendly environment. Glass size is manageable at 280ml, so you aren't tipping out much if you discover a dud beer. Historically 12,000 tickets sell out in 90 minutes. Not many people outside the local area know about this festival cause unless you have queued for your tickets you don't get to go. If you are keen to go, make sure you are in town the first week of December when tickets go on sale.

2. New Zealand Beer Festival - Auckland
This festival is the new boy in town and with the history of the previous Auckland based beer festivals it will be interesting to see this one make it past it's second year. I believe it will, as it is run professionally and with a long term vision to be bigger and better. Branding is solid and there is a huge spend on a broad range of media advertising. Interesting venue - in the stables of Ellerslie Racecourse, but it does give the insurance to shelter if it was to rain. 24 beer companies, 50+ different beers. Glass size is on the large side for sampling at 330ml but all beers this year are set at $5. 23rd February 2008

3. BrewNZ - Wellington
This year sees the return of the public side of BrewNZ with a public day at the Town Hall. Now that the Brewers Guild of New Zealand is running the show on behalf of the brewers, we are likely to see something that showcases the greatest beers New Zealand has on offer. Dates still to be finalized, September 2008.

4. Blues Brews & BBQ's - Blenheim
See above, another successful Blues,Brews & BBQ's festival held in the South. Have had issues with Police and the use of glassware in the last 12 months. See background story

5. Kumeu Beer Wine & Food Festival - Auckland
New organizers last year, so it will be interesting to see how this on goes on Saturday 9th February 2008. Only four breweries represented this year, but worth a visit, only 20 mins out of Auckland.

6. Brewfest - Wellington
Brewfest the unknown. Trenthem Racecourse. Sounds like a good selection of breweries, if we could just get an official list. 16th February 2008. We'll know in a couple of weeks.

What is your favourite Beer Festival in New Zealand? Vote now.